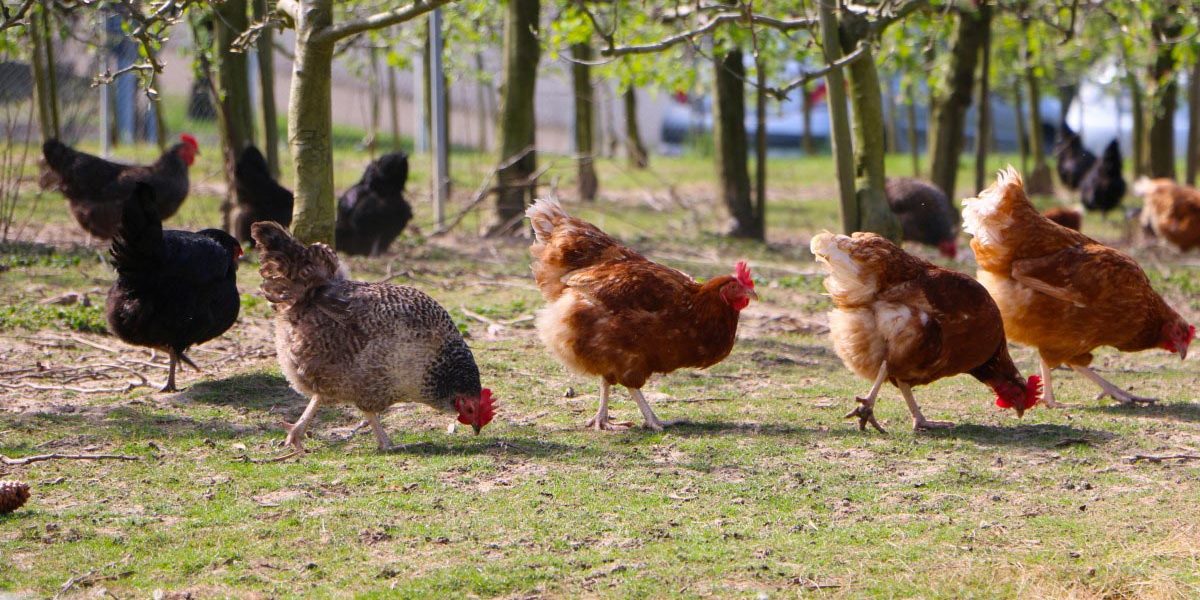 Like many species, chickens come into this world as either male or female. To make things confusing, different terms are used to specify gender based on how old the bird is. For chickens that are less than one year old, otherwise known as “Chicks”,we use the term “Pullet” to refer to a female. And, chicks that are male are referred to as “Cockerels”.

As your pullets and cockerels grow up and cross the 1-year mark, they become “Hens” and “Roosters” respectively. Several chickens living together in your backyard may be referred to as a “Flock”.

You will hear the term “Meat Bird” used to refer to chickens raised with the intention of butchering for their meat. Meat birds may be cockerels, pullets or at time hens, but are unlikely to be roosters. Most meat birds are harvested around 6-8 weeks of age, and even though you can get away with butchering a mature hen, you would not want to butcher a mature rooster because the meat becomes too tough and strong flavored to enjoy.

Some cockerels have their reproductive organs removed or incapacitated in order to encourage certain characteristics in their meat. This procedure is called “Caponizing” and the cockerel is referred to a “Capon” after the procedure.

Chickens raised primarily for their egg-laying skills are called “Egg Layers”. And, those raised for both their eggs as well as the potential for butchering are referred to as “Dual-Purpose”. Chickens in either of these categories tend to have smaller bodies and grow more slowly when compared to meat birds.

In order for a fertilized egg to hatch a baby chick successfully, it must be “Incubated”, or kept at the correct temperature and humidity for a period of time. Once hatched, chicks must be kept in a “Brooder” or under the protective care of a mother hen to keep them warm. Hens that are sitting on eggs are called “Broody” and some refer to it as “Going Broody”.

“Candling” is the technique used to check an egg for fertilization or blood spots. People used to use candles to illuminate the eggs. Nowadays, special flashlights are used.

Another term used when talking about chicks is “Coccidiosis”. This disease affects chicks that are overly exposed to damp conditions or have unhealthy contact with excrement. You will find medicated feeds that help prevent this condition as well as vaccines. But, many people avoid this problem simply by keeping their chicks’ environment dry, clean and not crowded.

Chickens come in many shapes, sizes, colors and dispositions. We differentiate chickens first by “Classification”. Classifications are based on the geography from which a chicken’s ancestors originated and include:

“Bantams”, which are miniature chickens, do not follow the same classification system. Instead, they are classified based on whether or not they are a game breed, the style of their comb and the presence of feathers on their legs. Bantams are cute pets, but their eggs are much smaller than large birds and they are not often butchered for meat.

Within each classification of large birds, you have many “Breeds”. Breeds are helpful in telling us the characteristics that make one lineage of chicken different from the next. Some are great for butchering and others are great for laying eggs. Some are quite docile, and others are very aggressive. Some lay white eggs, and other lay brown eggs. Breeds are then broken into “Varieties”.

Chicken breeds have become closely linked to science, and you will hear the term “Crossbreeds” or “Hybrid-Cross” to refer to the intentional breeding of different type of chickens in order to create chicks that have specific characteristics. Though it may be counter-intuitive, you cannot breed two of the same crossbreeds and expect the offspring to be similar to their parents.

“Purebred” chickens, on the other hand, have similar characteristics to their parents. When you breed two purebred chickens of the same lineage their off spring are purebred as well. Another way to say it is that they “Breed True”.

Regardless of breed, some tendencies are common in all chickens. For one thing, all chickens like to “Roost”. This term refers to the way chickens frequently stand on and even sleep on an elevated “Perch”. A perch can be something you add to a coop like a wooden dowel or even a 2×4 turned on its side. It can also be any ledge, branch or similar surface a chicken gets his toes around.

Another commonality among chickens is the fact that they have “Droppings”, or excrement. If you have children, you may have come across the book Everyone Poops. If not, we are sure you get the idea. Chicken droppings are often used as fertilizer, and unless you are crowding a ton of chickens in a tight space, the aromas are never as bad as people without chickens claim!

While we are talking about droppings, it seems like a good time to touch on chicken anatomy. The fertilizer, so to speak, comes out of the chicken’s “Vent”. For better or worse, this is also the opening that the eggs emerge from! Take a little comfort in knowing that the eggs work their way down the “Oviduct” before exiting the vent while the dropping follow a completely different path.

Chickens are certainly different than other pets you may have. One of the differences is that chickens have a “Crop” that helps them process and digest food. In addition to staging food, the crop also contains what we call “Grit”. Grit can be something you purchase from a website like DIY Chicken Coops, or if you are “Free Ranging” your birds in a large field, grit can consist of pebbles the chickens pick up as they peck.

The food you buy for chickens is called “Feed”. And, you may hear the term “Scratch” used which is also feed, but tends to be less nutritious, heavily based on corn and used more as an occasional treat.

Hopefully this quick primer helps you learn more about the language used by those sharing your passion for fresh eggs and raising chickens. If you come across a term you don’t understand, make sure to send us a quick note or post a question on our discussion board.