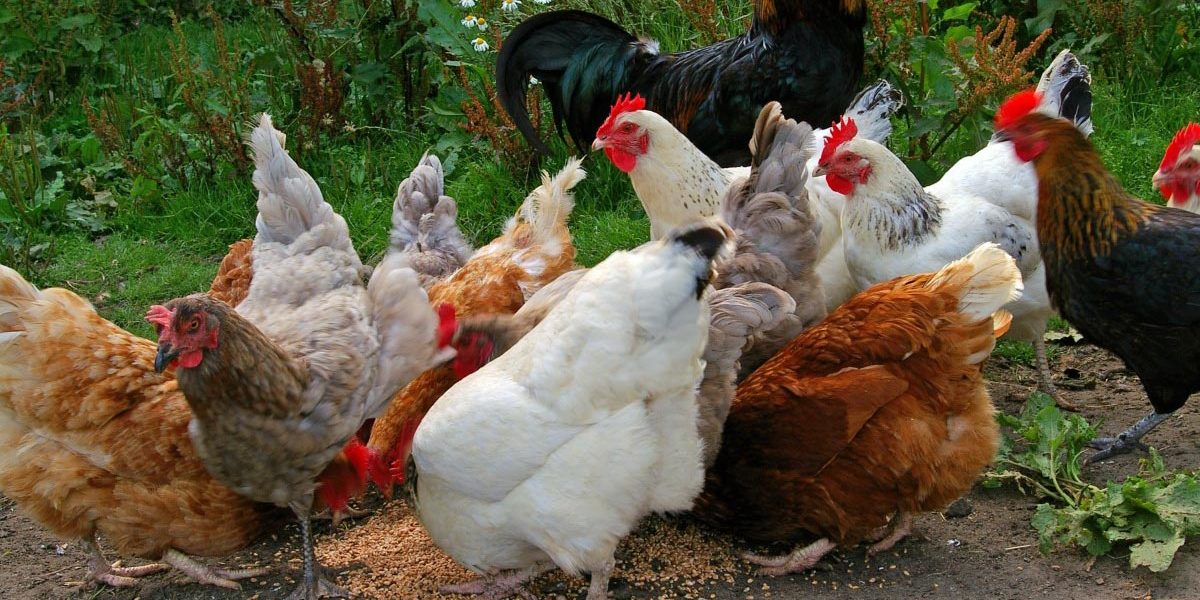 We are big advocates of education! Understanding your chicken’s digestive system, what is normal and what is not will help you recognize if something is wrong so that you can correct the problem and keep your chickens happy!

Beak – Obviously, this is where it all starts! Glands within the beak secrete enzymes which wet and start to break down their food. There are actually quite a few glands (Maxillary, Palatine, Lingual, etc) that secrete enzymes and sit below the epithelium (surface tissue). Chickens do not have teeth so there is no “chewing”. They use their tongues to move food to the back of their mouths where it is swallowed and moves on to the esophagus.

Esophagus – The esophagus is a muscular flexible tube that moves food from the mouth to the crop. Then, the post-crop esophagus carries the food from the crop to the proventriculus.

Crop – The crop is a bulge or out-pocket of the esophagus where food and water are temporarily stored. For chickens, the main purpose of the crop is to send the hunger signal to the brain when it’s empty. An empty crop is the signal that it’s time to eat! For some birds, the crop is more of a predatory defense. It allows birds to scarf down a relatively large amount of food quickly, store excess food in the crop and digest their food over longer periods of time requiring them to spend less time out in the open hunting for food.

The crop can cause problems if impacted. For more, read our section on crop impaction.

Proventriculus – The proventriculus may be referred to as the glandular stomach. This is an area where chemical digestion takes place. For a chicken, this is where the digestive process, or break down of your organic chicken feed, really begins. Much like in humans, chemicals (such as hydrochloric acid) are added to the food which helps break it down and can also kill potentially harmful bacteria. It is called the “pro” ventriculus because it comes “before” the ventriculus. The two organs are related, because together, they serve the function of a stomach. The proventriculus serves as the glandular stomach (sometimes called the ‘true stomach’) and the ventriculus (or gizzard) serves as the mechanical stomach.

Ventriculus or Gizzard – The gizzard is the common term for this part of the anatomy and it is unique to birds. Once the food has been mixed with chemicals from the proventriculus, it passes to the gizzard where strong muscles grind and mash the food.

Free range chickens typically pick-up small stones when foraging. These stones are broken down by the chemicals in the proventriculus and then used in the gizzard to aid in the mechanical digestion. Once the small broken down stones get to the gizzard, they act like teeth as the gizzard grinds and mashes the food. For chickens that are fed organic chicken feed full of whole grains, poultry grit is a useful supplement to give your chickens some teeth!

Note: Keep your chicken house free of sharp objects (like staples, glass chards, nails and tacks). This probably seems obvious! It’s important to realize that chickens will pretty much eat anything including sharp objects. Sharp objects can get stuck in the chicken’s gizzard and the gizzard will try to break down the sharp object with constant grinding. Sharp objects like glass and staples are more resilient than the gizzard walls…. so the constant grinding will result in the gizzard breaking down its own walls and will eventually create a hole. If a chicken’s gizzard gets damaged or punctured, the chicken will be unable to digest food properly, become malnourished and die.

Small Intestine – Overall, the small intestine is where the feed is converted to useable nutrients and absorbed into the blood stream to be transported to cells. About 4.5ft in length in a mature chicken, the small intestine is normally broken down into three main parts known as the duodenum (or duodenum loop), jejunum and ileum. With chickens and fowl in general, it is difficult to distinguish the point where the jejunum ends and the ileum begins. So, for purposes of this article and our beloved chickens, we’ll break the small intestine into two parts: duodenum and the lower small intestine.

Duodenum – The duodenum uses digestive enzymes from the pancreas and bile from the gall bladder (via the liver) to further break down the food into useable nutrients. The pancreas also provides biocarbonate to counteract any hydrochloric acid that was passed down from the proventriculus.  The digestive enzymes from the pancreas mainly break down proteins. The bile from that is passed through the liver from the gall bladder is responsible for breaking down lipids (or fats) and fat soluble vitamins. Fat soluble vitamins include Vitamins A, D, E and K. Once the nutrients are broken down, villi are responsible for the absorption of those nutrients. Villi are finger like in shape. They’re composed of bundles muscle fiber, lymph vessels, capillaries and other tissue that are wrapped in an epithelial layer covered in goblet cells (like a mucus membrane). Villi provide more surface area inside of the small intestine (both duodenum and lower small intestine) to promote the absorption of nutrients and the efficiency of the digestive process.

The remaining yolk sac that is taken internally allows the chick obtain nutrients and water without eating or drinking. It’s gives them a few days to acclimate to the world. It’s also the reason that day old chicks can survive being shipped longer distances from the hatchery.

If the naval does not heal properly during the hatching process, it could result in an infected yolk sac or Omphalitis. See more in our article Omphalitis in the Chicken Health section.

Liver – The liver is a relatively large, bi-lobed (right and left) multi-functional and useful organ! The liver is a busy place. It responsible for detoxification, bile production, metabolism of lipids, carbohydrates and protein, synthesis of plasma proteins (aid in blood clotting), blood cell creation and destruction and storage of fat soluble vitamins (which presumably aid in detoxification).

We find it interesting that the liver has the ability to regenerate cells quickly and even with that re-growth ability, it still carries excess capacity. In other words, much of it could be destroyed and it would still function well under normal circumstances.

Gall Bladder – The gall bladder aids in the digestion of fats. It mainly serves as a storage facility for bile produced by the liver. Two bile ducts run from the liver. One runs to the gall bladder primarily for storage of bile and one runs directly to the duodenum where the bile is used to break down lipids.

Spleen – The spleen is part of the lymphatic system. It’s shaped like a large lymph node and is responsible for filtering the blood. And, it’s conveniently located near the primary point of digestion so your chickens can further filter potentially harmful organisms before nutrients hit the blood stream!

Ceca – Ceca are two pouches that attach to the digestive system where the small intestine meets the large intestine. Each cecum (singular word for the plural ceca), is slightly shorter in length than the duodenum. The ceca reabsorb any water remaining in the fecal matter. Furthermore, fermentation of any remaining crude material happens here and that fermentations results in the production of fatty acids and B-Vitamins (B12, biotin, folic acid, niacin, thiamine, pantothenic Acid, pyridoxine and riboflavin). However, because the ceca are located towards the end of the digestive tract, only minimal amounts of these nutrients are absorbed (but we’ll take them!).

The ceca empty their contents 2-3 times each day. The wastes dropped from ceca often contain a more distinctive and foul odor then “normal” droppings. Droppings from the ceca are dark yellow (or mustard colored) to brown. They are less solid and pasty in texture. Sometimes, the novice, will confuse ceca droppings with diarrhea. These droppings are normal, should happen 2-3 times a day and a good sign that the digestive system is functioning properly.

Cloaca (or Venet) – In the Cloaca, waste products from the urinary system and the digestive system are mixed. Uric acid covers the fecal matter and this is what chicken droppings are often white. Normal fecal matter is dark brown and the urinary tract adds in the white uric acid crystal coat (since chickens do not urinate).

Interestingly enough, the reproductive system also utilizes the cloaca. This is the same vent where hens lay their eggs. Not to worry though! Your eggs are not mixed with fecal matter. Conveniently, when laying an egg, the vagina folds over protecting the egg from any waste byproduct and allowing the egg to enter the world unscathed!