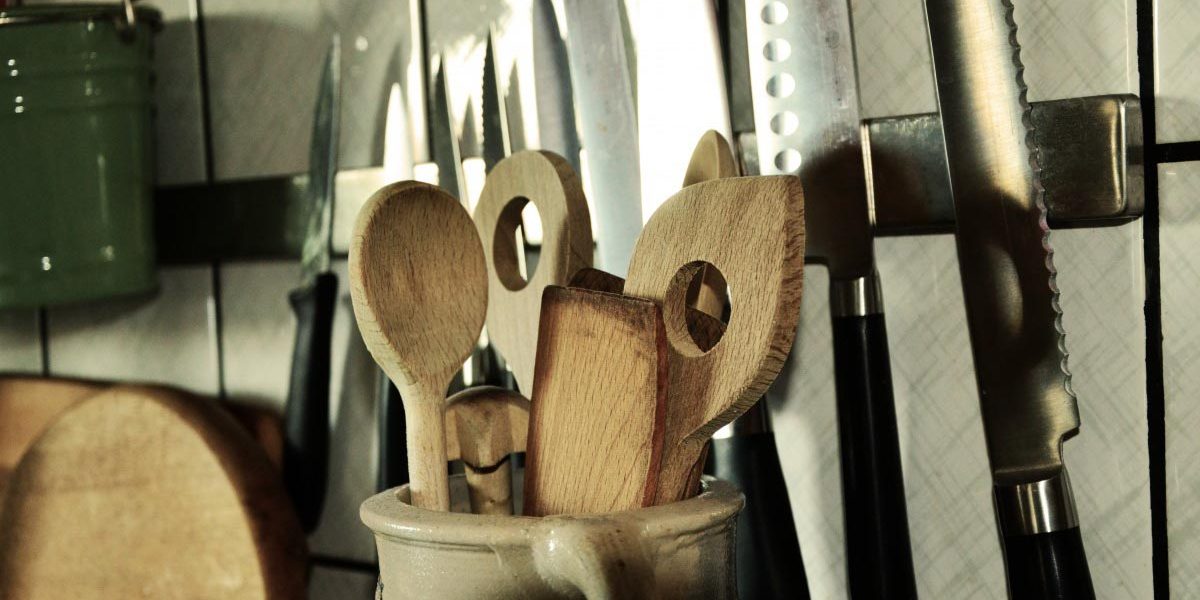 The process of butchering a chicken is often performed immediately after feathers are picked. Some people, however, prefer to cool the chicken before butchering. Either way, the process is the same.

There are some basic tools you will want to collect before beginning the butchering process including:

Butchering is a 10-step process that completes the meat bird process. The steps include:

The process of removing chicken feet during butchering is the same regardless of their intended use. To remove the feet:

The oil gland is located on the tail and it contains foul-tasking oil that you do not want to mix with the meat you plan to eat. The oil form this gland is used by chickens to lubricate their feathers. It’s not a deal breaker if this oil touches the meat, but take our word for it… it’s much better to remove this oil before you get any farther into the butchering process.

To remove the oil gland:

If you used an axe to kill your chicken, then the head is already removed. If not, you can use a sharp knife or kitchen sheers to remove the head above the top neck vertebrae. One downside to cutting of the head is that you may create bone fragments. If you want to use the time-tested method that leaves no bone fragments, just pull off the head using your hand. It should separate at the top of the neck. It’s not an approach that comes naturally, but it certainly works very well.

While you will not have much use for the crop or windpipe, you will probably want to save the neck. Neck meat is great for making stock, adding to stuffing, enhancing soup and much more.

To remove the neck:

Separate the vent from the body

As you know by now, the “vent” is the opening on the chicken than brings both fresh eggs as well as fresh fertilizer into the world. Because it is attached to the chicken’s intestines, which contain excrement, you need to be careful and prevent the contents of the intestines from contaminating the meat you plan to eat while butchering the bird.

Your goal is to separate the vent from the rest of the chicken’s body without puncturing the intestines, which attach to the back of the vent. This process includes the following steps:

As mentioned above, the process varies slightly depending on the way you intend to dress the chicken. We recommend a vertical cut through the chest skin (from keel to vent) when quartering, and we recommend a 3” horizontal cut when roasting. The reason you make a horizontal cut through the skin when planning to roast is that it gives you a place to tuck the end of the leg bones. When done properly, this flap of skin is a natural replacement for plastic restraints used in commercial chickens and turkeys.

Remove the internal organs and separate the giblets

Just like cleaning a fish you just caught while camping with the family, before cooking a chicken, you will need to clean out the “guts” otherwise known as internal organs or viscera. Once everything is removed from the body cavity, you have the option of preserving the edible components, called giblets, that include the heart, liver and gizzard.

To remove the internal organs:

Now that the organs are removed, locate the heart, liver and gizzard. If you plan to keep the giblets, follow these steps:

Maybe this step of butchering is so obvious it should go without stating. Nonetheless, the next step is to thoroughly rinse all parts of the chicken you plan to keep in cold water top ensure they are clean.

At the same time, you should contain and dispose of the parts of the chicken you do not plan to keep. Regulations vary depending on where you live. Some areas require you to bury the remains several feet under ground, and in some areas it’s okay to burn the remains. Check your local ordinances because often you are not supposed to throw the remains in your normal trash.

There are two primary ways to cool a freshly butchered chicken. The most common way is in a cold-water bath, and the second approach is to air-cool.

One criticism of some commercial operations is that they use large cold-water baths to cool many birds at once. The problem with this approach in a commercial setting is that fecal matter left behind by mechanical slaughtering machines may contaminate the water. Then, the contaminated water may be absorbed into the chicken skin and meat ultimately ending up at your dinner table.

A second criticism of commercial operations that use cold-water baths is that the chicken meat and skin become heavier as water is absorbed. Since chicken is typically priced per pound, the customer ends up paying not only for the chicken but also for the water absorbed in the cooling bath.

In a home setting, cold-water baths are a perfectly appropriate way to cool down a chicken. The benefit of using the cold-water approach is that you will not need much more than a big vessel (e.g., a basin or large cooler) filled with water and ice. You may need to add additional ice once the warm birds are added, but other than that effort, the process is straightforward. The primary downside to water-cooling is that your chicken will absorb water from the bath, primary in the skin. Once the skin absorbs water, it will be less likely to brown and crisp when baked. If you want to roast your chicken to a golden brown, you may want to consider air-cooling.

To air-cool a chicken, you will need an empty refrigerator. Simply wrap each bird in a cotton cloth is ensure it does not dry out, and place it in the fridge. Ideally, keep chicken on racks in the refrigerator, not on solid shelves. The racks allow much better air circulation. Do not overcrowd the space because maximum airflow will ensure quicker cooling.

In both the cold-water bath approach as well as the air-cooling approach, your objective is to get the chicken below 40° F as quickly as possible, but not below 32° F (freezing). Once the birds reach the desired temperature, you should move on to the next step in the process to age them.

Humane Techniques for Chickens
May 9, 2020